There are 4 main types of buttercream in the world of baking. These being meringue based buttercream (Swiss or Italian), American Buttercream, Ermine Buttercream or Custard based Buttercreams (French or German).

When it comes to making cakes, there is no one buttercream that is significantly better than another, each has its own benefits and fallbacks and which one is “best” depends very much on:

In this post I will unpack the differences between each of these buttercreams and the pros and cons of each, so that you can decide which type of buttercream is best for your situation.

American Buttercream is made by whipping butter and adding salt, powdered sugar and flavouring. The powdered sugar provides structure to the butter, allowing it to be whipped and hold its shape.

This is the easiest and fastest to make of all buttercreams, and is the one that home bakers are most likely to be familiar with.

Best for: American Buttercream is a great easy option for home bakers. There is no fancy equipment required (only a hand held electric mixer and bowl) and it is easy to achieve a firm buttercream that will allow you to pipe interesting shapes and display your creativity.

This buttercream will form a crust as it sets, which some people really love the taste of.

Not recommended for: With a high ratio of powdered sugar to butter, American Buttercream is very sweet. It therefore doesn’t pair well on cakes that are very sweet or rich (e.g mud cakes) or cakes which will have a high amount of frosting to cake (aka it’s not a great option if you want to make a cupcake piled high with buttercream swirl).

Where they differ is the method in which the meringue is made. Swiss Meringue Buttercream is made by heating the egg white and sugar over a double boiler until 160°F degrees (71°C) – at which point the eggs are considered “cooked”.
This mixture is then whipped on a stand mixer until it cools to room temperature and forms stiff peaks, at which point you add the butter.

Making Italian Meringue requires you to make a sugar syrup by heating sugar and water to 240°F degrees (115°C). This sugar syrup is then carefully whipped into egg whites. The hot sugar syrup essentially cooks the egg whites as it is added.  Then, as with the Swiss Meringue Buttercream method, continue to whip the egg whites until cool, and add the butter.

Equipment Required: Both methods require the use of an electric stand mixer.  You could in theory use a hand held mixer, but you may need to whip the egg whites for upwards of 20 minutes.

What is it best for: With a soft silky texture, both meringue buttercreams pair well with a wide range of cakes. Both are suitably stable to create tall layered cakes and pipe smoothly allowing bakers to create intricate piping details.

Italian Meringue Buttercream is slightly more stable in higher temperatures, so if you live in a warmer climate and you are tossing up between using these two buttercreams it may be worthwhile to go the extra effort to learn how to make Italian meringue buttercream.

What is it not good for: If you are a complete novice or if you do not have the right equipment (ie a stand electric mixer) than I would recommend you use either American Buttercream or Ermine Buttercream.

Ermine Buttercream is made by cooking up a mixture of flour, sugar and milk (this is called a roux or pudding) and adding this to whipped butter.  The flour acts as a stabilising agent, which is what allows the whipped buttercream to hold its shape.  The end result is a creamy smooth buttercream that like meringue Buttercreams, is not overly sweet.

Ermine Buttercream is the traditional topping for red velvet cakes, but it has gone out of favour recently, with most people preferring cream cheese frosting instead.

What’s it good for: Ermine Buttercream is significantly easier to make than meringue buttercreams, and even a novice baker can quite successfully make ermine buttercream using a hand electric mixer. It’s therefore a good option for home bakers who want a less sweet alternative to American Buttercream.

Also as there are no eggs involved, Ermine Buttercream a great option for people with egg allergies or who may be uncomfortable eating meringue buttercream (e.g pregnant women).

What it’s not good for: Ermine Buttercream is quite heat sensitive and not overly stable. It’s a good option for adding to cupcakes, but would need to be used in conjunction with a more stable buttercream to be used to make a layered cake.

Ermine Buttercream doesn’t store well.  It tends to separate when placed in the fridge or freezer and can be difficult to revitalize.  For best results it should added to the cake soon after being made.

Both German Buttercream and French Buttercream are described as custard buttercream, as they use egg yolks instead of egg white. For this reason they have a completely unique taste to all the other buttercreams outlined in this article.

Custard Buttercreams have a flavour reminiscent of custard (surprise, surprise) and as they use egg yolk, they have a pale yellow colour (as opposed to Meringue Buttercreams which are quite close to white.

What is it good for:  If you’re a baker that finds themselves discarding a lot of egg yolks, these recipes might be appealing. For example if your making macarons, the egg yolks could be used to make a French buttercream filling.

What it’s not good for: As this buttercream contains egg yolk, it will naturally have a yellow tinged colour.  This can make it challenging dye using food colouring.

As you can see there clearly their are a wide range of buttercream techniques and recipes.  The “best” buttercream will depend very much on your unique situation.

And if you are looking for a unique buttercream flavour, give either French or German Buttercream a go.

Did this post has inspire you to try a new buttercream recipe?  If so, I’d love to hear from you.  You can find me on Pinterest and Instagram, or email me via the contact form below. 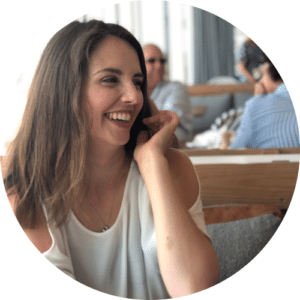 Hi there, thanks for visiting!

My name is Kylie and in case you hadn’t noticed, I love to bake.  Baking is my safe space, I’ve never met a cupcake that didn’t bring a smile to someone’ s face.

Baking cakes with magic hands 😂 I love this va